Growing up as Nigerians, we hear different stories of both the pre-independence and post-independence eras. Till date we still hear different stories of Nigeria. I say “different” stories because what matters is who you hear them from or where you read them. You wouldn’t particularly hear the same story of the civil war because the story of a Yoruba would differ from that of the Igbo.


From the first independence speech given by Alhaji Sir Abubakar Tafawa Balewa (Nigeria’s first prime minister), there was a depiction of the joy of self-government and not joy of solitary unity. In 1953, Anthony Enahoro moved the motion for self-government while Ahmadu Bello moved a counter motion. This was sequel to our independence but it was already clear that diverse ethnicity was creating a big wound in Nigeria. Today, we follow the footsteps of our fathers. A child grows up to see Nigeria as a bad country; we are justified by our negativities, even by our own tribes. Well, yes there are so many negative stories about our country, the depressing ones are the fact that 5000 people apply for a job vacancy, every year over a million candidates sit for jamb and yet just a few get admission into the university, although the youths make up 45% of the entire population, 54% of youths are still unemployed and also the news of Boko haram. But have we ever turned to look at the bright side of it all? Electricity supply has been stable of recent though it needs improvement, road constructions have been going on (although these are the Government’s responsibilities). Also, Nigeria is one of the Blessed countries that experience little or probably no natural disaster.


We only see the bad side because of the conflicting stories we have heard, the Yoruba man is only a brother with his fellow Yoruba man and likewise for others. Do you know if our generation decides to turn things around then we will make this country even better? Let’s all realize that even as Nigeria has added one more year today and is now 54 years old that we are all one wherever we go, regardless of what tribe we come from, an Hausa man getting married to an Igbo woman should become a norm in the society, we should see the next person to us as a brother. This way, we prepare a better future for posterity and as we all know; THE FUTURE IS NOW! So let’s start by influencing ourselves now.


To clear things up, I am not Yoruba, neither am I Igbo or Hausa. I am NIGERIAN! I love my blessed country and I will stand for it wherever I go, will you?


Happy independence to us all. 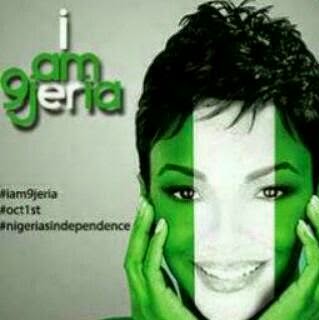 Posted by Unknown at Wednesday, October 01, 2014 No comments: 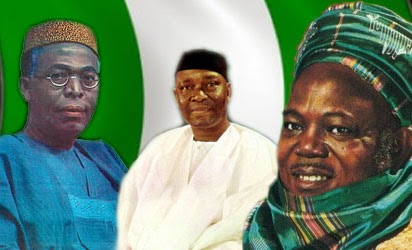 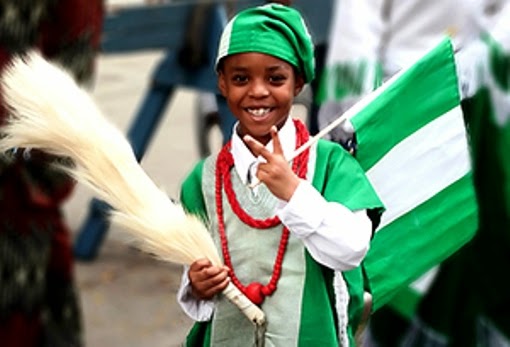 On the first day of October 1960, Alhaji sir Abubakar Tafawa Balewa (The first prime minister of Nigeria) gave the first independence speech. He expressed his boundless joy at this remarkable and historical achievement; "This is a wonderful day, and it is all the more wonderful because we have awaited it with increasing impatience, compelled to watch one country after another overtaking us on the road when we had so nearly reached our goal. But now, we have acquired our rightful status, and I feel sure that history will show that the building of our nation proceeded at the wisest pace: it has been thorough, and Nigeria now stands well-built upon firm foundations.
Today’s ceremony marks the culmination of a process which began fifteen years ago and has now reached a happy and successful conclusion. It is with justifiable pride that we claim the achievement of our Independence to be unparalleled in the annals of history. Each step of our constitutional advance has been purposefully and peacefully planned with full and open consultation, not only between representatives of all the various interests in Nigeria but in harmonious cooperation with the administering power which has today relinquished its authority. At the time when our constitutional development entered upon its final phase, the emphasis was largely upon self-government: We, the elected representatives of the people of Nigeria, concentrated on proving that we were fully capable of managing our own affairs both internally and as a nation. However, we were not to be allowed the selfish luxury of focusing our interest on our own homes".
This is only a part off the speech delivered by sir Abubakar Tafawa Balewa on this great day. In as much as our first prime minister ought to show gratitude to our colonial masters for granting us the right to self-government without a single drop of Nigerian or British blood and also recognized the efforts of those loyal Nigerians who advocated this right to self-government, he never pointed out the future Nigeria would achieve with this self-government. His speech that day shows that our leaders were only tired of the colonial rule and wanted to rule themselves, his speech that day shows that we were only competing with other countries, seeking who was going to achieve independence before the other. His speech that day never pointed out a "clear vision" for Nigeria as an independent state, a vision which the children unborn would hold on to and live by. The only motive of independence was self-government which is not a good enough reason looking at the diverse tribes and cultures that exist in Nigeria. They probably never foresaw the misguided nation Nigeria would turn out to become, a Nation with lot's of people and beliefs but no vision to unify. The lack of vision after independence is what led to Nigeria's first military coup in January 1966. Dr. Nnamdi Azikiwe's reaction towards it goes thus; " Violence has never been an instrument used by us, as founding fathers of the Nigerian Republic, to solve political problems. In the British tradition, we talked the Colonial Office into accepting our challenges for the demerits and merits of our case for self-government. After six constitutional conferences in 1953, 1954, 1957, 1958, 1959, and 1960, Great Britain conceded to us the right to assert our political independence as from October 1, 1960. None of the Nigerian political parties ever adopted violent means to gain our political freedom and we are happy to claim that not a drop of British or Nigerian blood was shed in the course of our national struggle for our place in the sun. This historical fact enabled me to state publicly in Nigeria that Her Majesty’s Government has presented self-government to us on a platter of gold. Of course, my contemporaries scorned at me, but the facts of history are irrefutable. I consider it most unfortunate that our ‘Young Turks’ decided to introduce the element of violent revolution into Nigerian politics. No matter how they and our general public might have been provoked by obstinate and perhaps grasping politicians, it is an unwise policy".
If Nigeria had a unified and clear vision, there would be no conflict in leadership because every person, every political party would be working towards achieving this vision. There would be no revolution, but because our founding fathers already established a selfish motive and tribalism in leadership, everyone who has ruled, and aspiring to rule only has his tribe and pockets in mind. It is very appalling that the youths (young turks) happen to be the brain behind violence in politics. The young turks in the military wanted a radical change against the established order thus the first coup. This coup was totally against politicians in power but now we see politicians using youths for selfish political motives. It is disheartening that pre-independence had no record of political violence and blood shed but post-independence records high number of political violence which begun six years after independence till date. This simply shows Nigeria was never ready for self-government at the time of independence.
The selfish motive of our founding fathers is what caused the Nigeria - Biafra war in which more children and youths perished than elderly people. If every tribe wants to lead at the same time, how can we move forward? If Nigeria had a clear vision which outweigh selfish motives, which denotes selfless service and which portrays a bright future, the tussle for power would be minimal and every person in authority would see that vision as a foundation for leadership. On this great day, let all Nigerian make a decision to live in integrity, be corrupt free and abstain from every form of political violence. Let all Nigerian youth begin to lead, not by being in position of power but by living right. We have a bright future and until we unify to a vision statement we cannot move forward. This is the youth vision. The future is now! Happy independence day. God bless Nigeria!
Posted by Unknown at Wednesday, October 01, 2014 2 comments: