THE BENEFITS OF BEING BILINGUAL

Being bilingual has been linked to a number of cognitive benefits. Research has studied how a bilingual’s first language and second language interact and has shown that both languages have an influence on the function of one another and also on cognitive function outside of language. 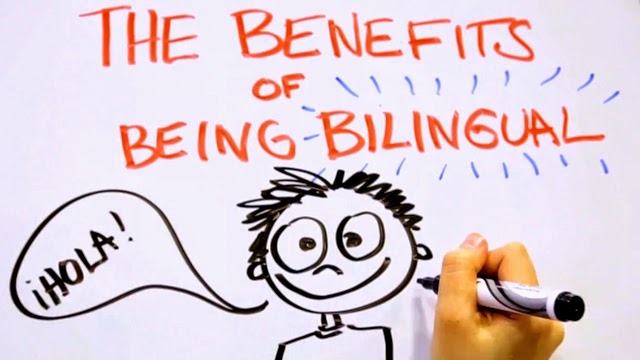 that bilinguals can benefit from significant cognitive advantages over monolingual peers in various settings and this brings us to the question; WHO IS A BILINGUAL? A Bilingual is a person able to communicate with someone else in two languages.

For generations, we were told that raising a child in two languages would leave them “confused”. The idea was that children would learn slower, learn less and generally be less successful if they were tasked with learning two languages instead of just one. Contrary to this belief, the truth of the matter is that bilingualism does not in any way harm a child’s intellectual development. In fact, researchers are starting to demonstrate that bilingualism has a number of cognitive benefits.

Currently, scientists like Ellen Bialystok propose that a bilingual individual uses executive control functions to separate the two languages. These executive functions are the abilities of the brain that we use for things like the higher level of decision making, paying attention in a crowded coffee shop or figuring out logic puzzles. So as a bilingual person manages their two languages, they are effectively exercising the same brain muscles.

As a result of this mental workout, bilingual children have been shown to perform better than their monolingual peers at tasks that require active attention.

Bilingual children have been shown to have greater metalinguistic awareness; they understand and can articulate how language works better than their monolingual peers.

Being bilingual enables you to connect with people. The following quote from Nelson Mandela fits wisely: ‘If you talk to a man in the language he understands, that goes to his head. If you talk to him in his language that goes to his heart’. Speaking to someone in their native language is a great complement to that person. Most people don’t care enough to learn the language of a country they are visiting for example and just expect everyone to speak English. Bilingualism is something to be sought after, to be searched out. Another language allows you to be plugged into a whole different culture, society and base of people. It allows you to see the world in a different way through the eyes of a different culture. It helps you connect with the people through their own culture, language and identity.More so; it makes you more tolerant and open to others.

Being bilingual definitely has its own benefits when it comes to jobs; as companies become more international, there is need for employees who are fluent in more than one language. Most employers are willing to pay you a higher salary for being fluent in two languages, but this isn’t the only perk, your brain also benefits from bilingualism. Believe it or not, being bilingual makes you smarter and improves your cognitive skills.

Being bilingual makes traveling more fun. It opens a world of opportunities.

Studies have shown that bilingual people have better task switching capacities because of their acquired ability to inhibit one language while using another. In other words, speaking two languages forces your brain to recognize two different language systems. So basically you become smarter. Did you know that people who speak more than one language tend to make fewer errors in their driving? A side benefit but a benefit nonetheless.

According to livingbilingual.com, being bilingual promotes mental agility and helps delay neurological disorders like dementia and Alzheimer’s disease. According to some studies, monolingual adults tend to show the first signs of dementia at the average age of 71. This is in contrast to bilingual individuals who show their first signs at about 76 years old.

You will find it much easier to learn a third language when you are bilingual plus your English will be enhanced as you are more aware of language structures, grammar, literacy and language skills.

Bilingual adults and children seem to have social and emotional benefits like being able to normalize negative states like anxiety, aggression, anger, loneliness and low self esteem frequently. They have greater tolerance and less racism. It seems likely that bilinguals would be more tolerant of differences and more open to diversity.

Globalization makes bilingual individuals more valuable in their future search for work. Bilinguals may also be bridge builders between different language communities, so they are essential for personal and professional networking.

Now that you know some of the benefits of being bilingual, it is time to get smarter. It is never too late to learn a new language. ARE YOU BILINGUAL?

Your comments are always appreciated.